“Shaken loose from their Kansas roots by the Vietnam War, the Civil Rights movement, the new age of psychedelic drugs and the incipient revolutions challenging America, Dick Russell and Steve Ewert embarked on their own challenge:  hitchhiking 4,000 miles across the Algerian Sahara into the heart of emptiness.  Their story is a riveting profile in curiosity, breakdowns and determination. The discovery at the end of their journey: all politics are personal.”

— Ross Gelbspan,  co-recipient of a Pulitzer Prize and author of  The Heat is On and  Boiling Point

In 1971 in Accra, Ghana, Steve Ewert woke up in a cold sweat. Bugs crawled out his mouth. Fear gripped his very soul. “I’m losing my mind!” he cried repeatedly to his travel companion Dick Russell.

“This is a really enjoyable, absorbing documentary. I loved the camera work, the music, and the whole project had the feel of an Errol Morris film. I really got to know Dick Russell and Steve Ewert as they tried to do something that only foolish youth could achieve. It reminded me of what it was like to go on an adventure and have your whole life ahead of you — to feel invincible; and then to suddenly realize you’re mortal, even in your 20s. And also — yes, you might just go insane on this adventure through the most desolate places in Africa.”
— Ken Nolan, screenwriter Black Hawk Down 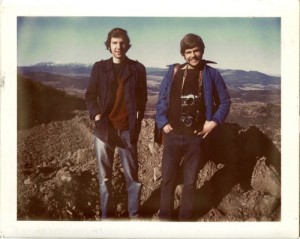 What started out as two young Kansas kids setting out to find themselves in late 1970, turned to disillusionment and danger. Photographer Ewert and writer Russell traveled across Europe experiencing the continent in Forrest Gump fashion — attending French President Charles De Gaulle’s memorial service at Notre Dame, meeting famed photographer Henri Cartier-Bresson, tooling around Paris with writer James Jones (”From Here To Eternity”) in his convertible, hanging out with Dutch anarchist weed purveyors in Amsterdam and rubbing elbows with American diplomats in Brussels. Along the way, their car was stolen — twice — and they were almost arrested in Amsterdam. If they were looking for experiences, Ewert and Russell certainly found them. 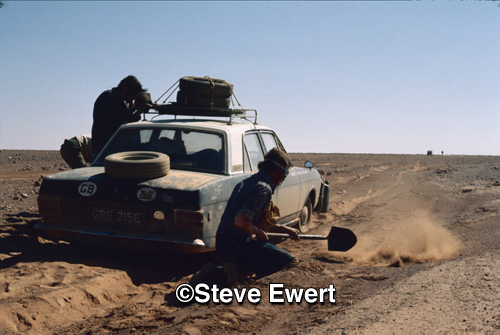 But the most fascinating — and dangerous — part of the trip started when the pair crossed the Mediterranean and hitchhiked across the Sahara Desert, a 2700 mile trip that started in revolutionary hotspot Algeria (where they intended to meet exiled Black Panther Eldridge Cleaver) and ended in sub-Saharan Ghana. With Ewert taking numerous pictures with his Nikon F and Russell prodigiously writing on his trusty Smith Corona Skywriter, — and after they had spend 36 hours stranded in the desert waiting for a ride — the duo eventually took a ride with a multilingual Dutch revolutionary who would triumphantly quote ”Quotations From Chairman Mao Tse-Tung” (aka Mao’s ”Little Red Book’) and purposely ditch the van into the sand so he could smugly watch Ewert and Russell dig it out in the blistering Saharan heat. Eventually, they made it out of the desert despite being perilously close to perishing more than once. “Hitchhiking to the Edge of Sanity“ is their story of adventure, disillusionment and, ultimately, friendship.

“Dick Russell and I are both boomers, both born in ‘47. Both part of the counterculture. Both hippies looking to change the world. But only one of us trekked across the Sahara. I’m a Jew, Dick is not. Guess which one of us made the journey? What an adventure!”
–filmmaker Rob Reiner

“Hitchhiking to the Edge of Sanity“ is completed and the educational version is now available for purchase. 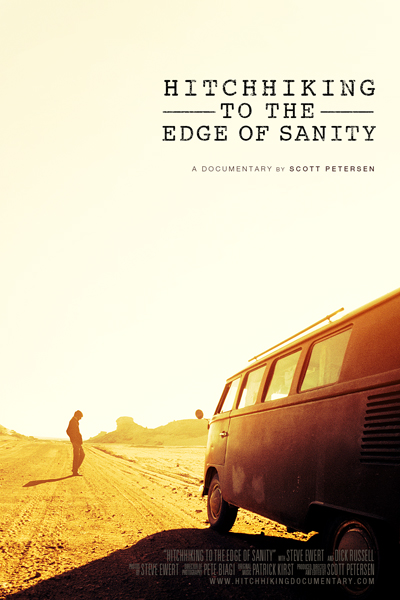